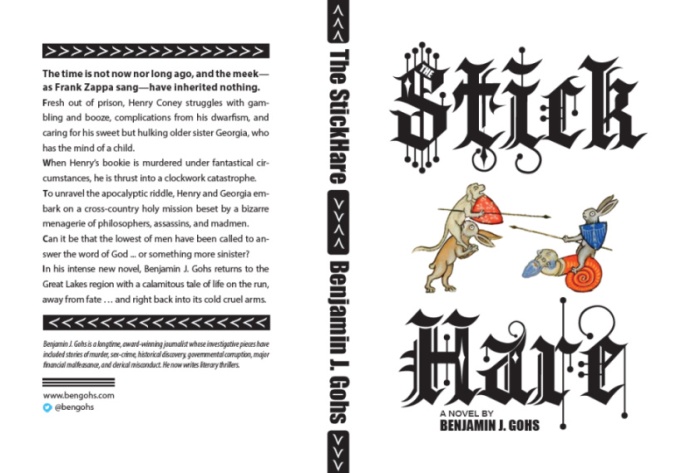 But, when you’ve only got a few seconds to get somebody’s attention, it’s one of the best ways to tell a stranger what your book is about.

I’m not pretending to be, nor do I want to be, some already famous writer.

I feel like the writing in my new novel The StickHare is uniquely my own.

But … he said dramatically … if I had to give someone the thumbnail mashup version of my book, I’d say it’s like Of Mice and Men meets No Country for Old Men with a tablespoon of the supernatural stirred in.

I also think I might have something pretty good here.

Oh yeah, the ones who engage in false humility.

Because everybody knows only writers who go on and on and on about how bad their writing is are actually the greatest writers of all. (Here that sound? That was me rolling my eyes until they fell out of my head.)

Only time and coldhearted critics will tell if my latest work about a downtrodden brother and sister’s fantastical bloody road trip through an America crawling with savage cruelty is worth a read or not.

If you’d like a free review copy of this literary adventure thriller, email me at benjamingohs@gmail.com.

From The Stickhare back cover:

The time is not now nor long ago, and the meek—as Frank Zappa sang—have inherited nothing. Fresh out of prison, Henry Coney struggles with gambling and booze, complications from his achondroplasia dwarfism, and caring for his sweet but hulking older sister Georgia, who has the mind of a child.

When Henry’s bookie is murdered under fantastical circumstances, he is thrust into a clockwork catastrophe.

To unravel the apocalyptic riddle, Henry and Georgia embark on a cross-country holy mission beset by a bizarre menagerie of philosophers, assassins, and madmen.

Can it be that the lowest of men have been called to answer the word of God … or something more sinister?

In his intense new novel, Benjamin J. Gohs returns to the Great Lakes region with a calamitous tale of life on the run—away from fate … and right back into its cold cruel arms.